The Assay: Finding a Glue With Biophysics

We typically think of biologically relevant protein complexes forming spontaneously through surface complementarity. However, with the discovery of the mechanism of action (MoA) of Rapamycin & Cyclosporin in the early nineties, it became apparent that protein-protein interactions (PPIs) could be mediated by non-proteinaceous molecules. Furthermore, such interactions could have beneficial pharmacological effects such as the inhibition of the central regulatory kinase mTOR. Since this initial ground-breaking discovery, many other molecules have been found with similar functions, at first natural products, but with the elucidation of the MoA of thalidomide (and rapidly thereafter the class of molecules that is known as iMids), also drugs.

Thalidomide is an example of a monofunctional molecule that induces complex formation between an E3 ubiquitin ligase (Cereblon, CRBN) and a substrate protein. The net effect is K48 linked poly-ubiquitination which leads to degradation of the substrate protein via the 20S proteosome. This effect has been called Targeted Protein Degradation (TPD). Monofunctional stabilizers of PPIs are now colloquially referred to as Molecular Glues, or just glues for short.

Heterobifunctional molecules that consist of two independent ligands (one for an E3 and the other for the substrate) connected by a linker represent an alternative approach to glues that has seen considerable success. A number of these so called PROTACs (Proteolysis Targeting Chimeras) are now in the clinical phase of development and offer an exciting alternative to traditional target inhibition MoAs. Interestingly, heterobifunctionals are also being used to achieve goals other than TPD. For example, Stablix is doing the opposite, targeting de-ubiquitinases to substrates to prevent them from being degraded. The commonality of glues and PROTACs is the formation of a ternary (3o) complex which adds an extra level of complexity over binary complexes in both the experimental and theoretical approaches. Here we focus on one particularly powerful experimental methodology which we illustrate with its application to glue discovery and characterization.

Conceptually, creating an assay for a glue is simple. On can simply conjugate an appropriate pair of fluorophores, one to the E3 and the other to the substrate, and obtain an optical readout such as Fluorescence Resonance Energy Transfer (FRET) or use a single fluorophore to detect changes in Fluorescence Polarisation (FP) when the two proteins are brought into proximity. However, in practice these assays prove very challenging to correctly implement. In our experience, fluorescence-based techniques are prone to many artifacts and therefore generate many false positives and negatives. Furthermore, cellular assays for glues are extremely complex.

We have used Surface Plasmon Resonance (SPR) to create a label free, information rich assay that is extremely sensitive for detecting complex formation (Figure 1A). The assay takes advantage of the fact that frequently the target to be degraded is an unstructured peptide that can be made synthetically including a biotin group at one terminus (although a recombinant protein also works well). The peptide is captured on the surface of the SPR chip by first immobilizing streptavidin which selectively binds biotin with fM affinity. We then characterize binding of the apo-host protein (often an E3 ligase) in the absence of a glue by flowing it over the surface and observing the real time change in mass (Figure 1B). In many cases this binding is weak or even undetectable. If a compound acts as a glue, this is readily observed as an increase in the amount of host protein bound at a constant concentration. Titration of the low molecular weight glue results in a very large increase in the mass of the surface, a result that can only happen if the ternary complex of 2 proteins and the glue forms. 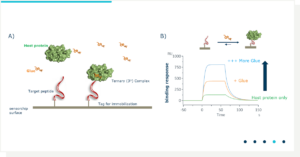 Figure 1. Surface Plasmon Resonance assay for detecting Molecular Glues. A) Schematic presentation of an SPR assay setup where the binding between the target peptide and host protein is monitored in the presence or absence of molecular glue. B) Binding of the protein to the surface is greatly enhanced in the presence of glue.

Proper use of the SPR assay allows us to characterize every aspect of the formation of the stabilized, ternary 3o complex including: 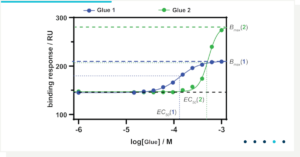 Figure 2. Dose response titration of two different glues to determine the EC50 and Bmax. While glue 1 (blue) has a stronger affinity, glue 2 (green) has a higher Bmax resulting in a greater concentration of complex when binding of the compound is saturated.

With access to such a complete data set, we are in a strong position to both discover and evolve molecular glues towards well characterized lead compounds.

A Sticky Needle in the Haystack

Previously we saw how SPR can be used to set up an information rich, highly sensitive assay to characterize every aspect of a molecular glue. Here we talk about how we can use the assay to screen for novel glues for any arbitrary partners.

For screening, we immobilize 1 protein, the target, on the surface of the SPR chip. We prefer to use a biotinylated, synthetic  peptide or an in vivo biotinylated recombinant protein using an AVI tag. We next characterize the binding of the second protein, we call the host. Often, but not always as we saw in part 1, the host is an E3 ligase that we wish to ubiquitinate the target to induce degradation. We optimize the assay such that in the absence of a glue, about 20% of the host is bound to the target (where possible). If koff for the target-host binding is impractically slow for screening, we develop a regeneration step that can quickly remove the host without degrading the immobilized target.

With the assay in hand, we screen each of the ~2,400 compounds in our fragment library at 500 µM with the optimized concentration of host. Note that one limitation of the assay is that it requires large quantities of the host (typically about 25 mg). Where this is not possible, we can invert the assay and use a single sample of the host, reducing protein demand to some 5 mg. We plot the binding response of the host in the presence of each glue as a percent enhancement of the binding of the host alone (Figure 3A). As expected, there are a number of fragments that reduce the amount of complex formed. These compounds likely bind at the same site as the target and compete with it for binding to the host. This data illustrates the power of fragment screening for discovering inhibitors of protein-protein interactions (PPIs). Happily, there are a number of fragments that increase the amount of host binding to the immobilized target. These are potential glues in that they bind to the host-target complex and improve the apparent affinity of the interaction.

Once the hits from the screen are selected, we titrate each into a fixed concentration of host-target complex. Through titration we can determine the apparent affinity of the glue for the complex (the EC50), as well as any possible changes in the kinetics of binding. Changes in these parameters are strong evidence that the molecule is actually functioning by stabilizing the protein-protein complex and not through an artifactual mechanism such as protein aggregation. Subsequent “2D” titration of the host at increasing concentrations of the glue reveals significant potency in the best of the hits, in this case roughly 1.5 log orders within the concentration range experimentally accessible (Figure 3B). 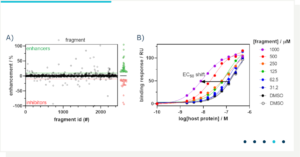 Figure 3. A) Screen of the ZoBio fragment library using the SPR based molecular glue assay described. Each dot represents a single compound. Responses below 0 represent fragments that compete with the host protein for binding to the immobilized peptide. Those above 0 indicate compounds that increase the protein-protein interaction and thus are likely glues. The 10% difference threshold used for selecting stabilizers or inhibitors is shown. B) Titration of the host protein at various concentrations of a molecular glue discovered in the SPR screen.

In our experience so far, we have seen that small, ligand efficient fragments can yield well-validated, potent glues and are therefore ideal starting points for such programs. In the next post we’ll look at why fragments are so adept for this function.

In part 2 of this entry, we saw that a carefully setup biophysical screen can yield a significant number of surprisingly potent hits. By why might we be surprised at the potency of a fragment stabilizing a protein-protein interaction? For the non-fragment specialist reading this, a quick reminder that fragments are generally defined as compounds with a molecular mass <300 Da, the number of hydrogen bond donors is ≤3, ClogP is ≤3 etc. We won’t go into the many justifications for using small libraries (~2,000 compounds) of fragments as a source for finding novel hit matter here, but in the more than 20 years of applying this approach to various mechanisms of action it has found great success. However, it has universally been found that such hits generally bind or have biological activity weaker than 10 mM, but more typically in the mid to upper mM range. Structural biology clearly explains the low affinity as the fragment hit typically only occupies a small portion of the binding pocket.

But are the pockets to be found in protein-protein complexes comparable to those of enzymes such as kinases or methyl transferases? One might imagine that the reason the protein complexes of interest for glues are weak is a lack of shape complementarity at the interface. If so, this might leave small gaps between the two proteins.  We examined this possibility. Thus far, there is only limited structural data for glue complexes, however, thalidomide - and the related iMids - (258 Da) Brefeldin A (280 Da), and Auxin (175 Da), all fit well within the definition of a fragment and yet they are highly potent drugs.

We looked at a recently published set of structures of 4 glues that stabilize the b-catenin-b-TrCP complex (PDB: 6M90-6M93) and determined the size of the pocket in this complex. The pockets in these 4 structures varied between 202 and 362 Å3 (Figure 4). We next calculated the van der Waal’s volume of each of the fragments in our library. The histogram shows that nearly all of the fragments in our library (and therefore any other library that obeys the so-called rule of 3) can in theory fit well into such pockets. In contrast, compounds forming a typical HTS deck are considerably larger and would likely not fit into this type of pocket without sterically clashing with the target. 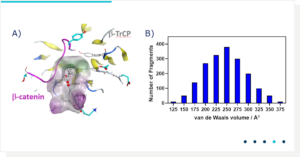 Figure 4. A) The pocket formed between b-catenin-b-TrCP in the structure 6M90, volume 319 Å3. b-TrCP is shown as a surface representation and the backbone of the b-catenin peptide is shown in magenta. B) Distribution in volume size of fragments within the ZoBio library.

Thus we propose that fragments are the optimal source of hit matter for molecular glues ideally complementing the interaction of the two proteins.