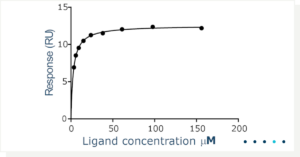 Figure 1. Langmuir fit of the response of a small molecule binding to a protein (the pharmacologic target). The fit has an R2 of 0.996 and suggests a KD of 3 µM.

Imagine you’ve just titrated 50 compounds using any modern assay and instrumentation. The software is certainly capable of automatically extracting the response for each concentration and fitting it to extract the affinity/potency. You might then see the curve above (Figure 1) and the fit values in a table. If the affinity or potency is in the range you expect, with a quick look, the binding curve might pass muster with a possible note that the compound has some solubility issues at the highest concentration used. You might then pass on the data to the medicinal chemist, unfortunately that would be a mistake. 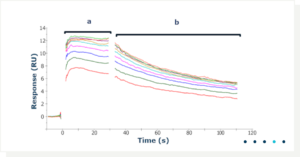 Our scientists never only look at the extracted binding curve, we always inspect the raw data as shown above (Figure 2). Here you see the sensorgrams, the surface plasmon resonance binding response, as an increasing concentration of ligand in solution is passed over a surface upon which the target is immobilized. The experienced SPR scientist would immediately be drawn to two aspects of these sensorgrams. First, the slope of the sensorgram during the contact period, during which the ligand is flowing over the surface (a), is negative where one would expect it to be zero or slightly positive. Second, the apparent off rate during the wash period (b) in which the ligand is dissociating from the immobilized protein is inconsistent with the affinity derived from the equilibrium fit. Therefore, the ZoBio team adjusted the association and dissociation time and re-titrated at lower ligand concentration. Instead of using discrete injections and washing to baseline after each as in the first run, they used single cycle kinetic analysis (Figure 3) in which the injections of increasing ligand concentration follow each other immediately. This method is more appropriate for higher affinity ligands and allows one to determine both the equilibrium affinity and the on and off rates. This data convincingly demonstrates that the compound has a KD of 22 nM, more than 2 orders of magnitude more potent than originally suggested and provides the kinetic parameters as well. 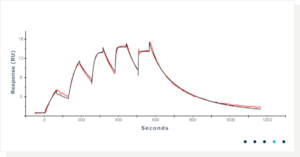 Figure 3. Single cycle kinetic analysis of the same ligand binding to an optimized surface of the same immobilized protein as in Figs. 1 & 2. Red trace is the experimental sensorgram and the black is a fit to a 1:1 binding model. The affinity is 22 nM.

That’s science in the cauldron. Always be meticulous.