Is your biochemical assay not sensitive enough to characterize inhibitors with affinities of hundreds of µM?  Does your assay suffer from false readout from the intrinsic fluorescence of compounds at high concentration?  Did you know that Surface Plasmon Resonance (SPR) can be set up in such a way that the readout represents the biologically relevant interaction of two biological partners, and therefore it can directly detect compounds disrupting such interactions?

In the example below, we describe how a biologically relevant SPR assay can assist compound validation in the early stage of hit discovery. We screened the ZoBio fragment library against an epitranscriptomic reader (Reader) immobilized on a sensorchip using SPR (which we refer to as the forward SPR assay (fSPR)). The Reader specifically recognizes riboadenosine that has been methylated at the 6 position (m6A). Our aim was to identify small molecules that inhibited the Reader binding to m6A containing oligo ribonucleotides. The subsequent dose-response study using fSPR confirmed approximately 100 chemically unique hits with affinity for the Reader in the range of 50 to 1,000 µM. We needed an efficient and artifact-free way to filter out irrelevant hits (that is, those that did not prevent the Reader-m6A RNA interaction), so we setup an SPR assay with a biologically relevant readout. In what we refer to as an inverse SPR  assay (iSPR), we immobilized the m6A containing oligo ribonucleotide on a sensorchip (Figure 1A) and monitored the binding of the Reader by the SPR sensorgrams (Figure 1B). 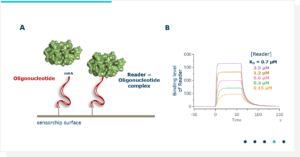 Figure 1. A) Schematic presentation of an inverse SPR assay where the Reader protein binding to the immobilized m6A oligo ribonucleotide was monitored. B) The SPR sensorgrams  of the Reader binding to the immobilized m6A oligonucleotide at increasing concentration. The affinity was determined by fitting the equilibrium response to a 1:1 binding model yielding a KD of 0.7 µM.

In iSPR, if a ligand binds in the m6A pocket of the Reader, it should prevent binding to the immobilized oligo ribonucleotide, resulting in a reduction of the SPR response (Figure 2A).  Two of the 100 confirmed fragment hits (1 and 2) displayed very similar affinity for the Reader (KD = 70 and 100 µM respectively, not shown) in the fSPR assay. However, when assayed by iSPR, only 1 reduced the SPR response in a concentration dependent manner (Figure 2B left) while 2 had almost no impact (Figure 2B right). This data suggests that there are at least 2 small molecule binding sites on the reader and only 1 targeted the relevant m6A site. The iSPR-based discrimination was highly accurate as subsequent orthogonal binding site mapping using protein observed NMR had a 100% confirmation rate (not shown).  The iSPR assay allowed high throughput removal of irrelevant hits and was used to direct the follow-up structural biology and medicinal chemistry efforts to ensure that all compounds of interest had the desired biological activity. 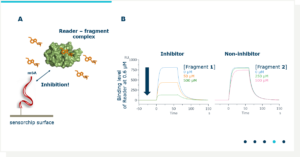 Figure 2. A) Schematic presentation of the inverse SPR assay being used to assess biological activity of confirmed hits. B) Fragments 1 and 2 bound the Reader with affinity of 70 and 100 µM respectively in fSPR. We assessed the biological activity of 1 and 2 using iSPR which clearly showed that only 1 inhibited Reader binding to its target RNA (left) while 2  bound at a site that was irrelevant for the desired Mode of Action (right).

That’s Science in the Cauldron, finding new ways to get the information you need to keep your drug discovery campaign moving forward.